Resting place of a Princess - All Saints' Church, Harewood

All Saints' Church, Harewood is full of wonderful tombs, but it is also the resting place of Mary, Princess Royal and Countess of Harewood; The only daughter of King George V and Queen Mary, she was sister to Kings Edward VIII and George VI, and aunt of HM Queen Elizabeth II. Read her story... 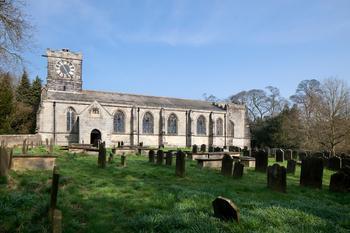 The current church of All Saints was built c. 1410 in the Gothic Perpendicular style. In about 1366 Sir William Aldburgh built a new stone castle on the south side of the River Wharfe which became the home of the Redmans and the Rythers. Three of the six spectacular alabaster monuments that stand in the church come from these two families. It is perhaps for the amazing Medieval Alabaster Tombs that the church is home to, why it is most famous. However All Saints has a Royal link...

Victoria Alexandra Alice Mary (b. 25 April 1897  d. 28 March 1965) was the only daughter of King George V and Queen Mary of Teck. She was one of five children that the King and Queen had and as such was the sister to the future Kings Edward VIII and George VI, and subsequently the aunt of HM Queen Elizabeth II.

A Princess of many firsts

Whilst it is easy to remember the stories of her two eldest siblings, and the tragic fates of her two youngest; Prince George who died in a plane crash during WWII and Prince John who suffered from epilepsy. Her story is a remarkable one, and one which paved the way for future female members of the Royal Family.

During the First World War, in 1914 Princess Mary came up with the idea to send every serving soldier and sailor, over 2.5 million of them, a Christmas present.

This would become known as the Princess Mary Gift Tin. In each ornately embossed brass tin, soldiers could enjoy cigarettes, tobacco, a pipe, and a lighter as well as a Christmas Card from the Princess and photos of Princess Mary and her parents King George V and Queen Mary. This gesture was no small feat but it had a tremendous effect on the morale on the troops.

This seemed to have made a lasting impact on the Princess Royal, as in 1918 upon her twenty-first birthday, she asked her father, King George V, to be given special permission to train and to work as a paediatric nurse. The King gave his blessing, however he ordered a carriage to convey the Princess from the Palace to Great Ormond Street where she worked twice a week in the Alexandra Ward.

In another first for the Princess, on 20 November 1918, Princess Mary was the first member of the royal family to travel to France following the Armistice. During her visit, the Princess Royal visited centres associated with Queen Alexandra's Royal Army Nursing Corps or Voluntary Aid Detachment Units, and hospitals with wounded soldiers.

Her marriage to Viscount Henry Lascelles, the Sixth Earl of Harewood at Westminster Abbey on 28 February 1922, made her Yorkshire’s Princess.

Today we often think of Royal Weddings taking place in Westminster Abbey or perhaps St Paul's Cathedral but this was not always so. Princess Mary was actually the first child of a monarch to marry at the Abbey since 1290. Yet another first for the Princess!

She was aged just 22 when she married Henry Lascelles, who was 15 years older than the Princess. They had met each of the previous year in 1921 at the Grand National, before Henry proposed during a November trip to the Royal Estates at Balmoral and Sandringham. Their marriage is portrayed as being an unhappy one in Downton Abbey the movie, however there is no evidence to support this and during their 25 year marriage, they had two sons together George Lascelles (1923-2011) and the Hon Gerard Lascelles (1924-1998).

From Westminster Abbey to All Saints, Harewood

Once they were married, Lord and Lady Harewood split their time between their various homes which included:

The Harewood Estate has a long history and it came into its present state following the merging of two adjacent estates, those of Harewood Castle; a 14th century fortified Tower House, and Gawthorpe Hall Manor. The castle was built by Sir William de Aldeburgh. However, in 1391 when his son died with no male heir the estate passed to his two daughters, Sybil and Elizabeth. They and their husbands Sir William Ryther and Sir Richard Redmayne shared occupation of the castle, an arrangement the two families continued for more than 200 years. All Saints Church house several majestic alabaster monuments to members of these families. The estate was sold to the London merchant Sir John Cutler in 1696, after whose death it passed to the Boulter family who in turn sold it to the Lascelles in 1721 who used money from the West Indian sugar trade.

The Lascelles contracted the architect, John Carr, to build on the Estate Grounds a new house. Carr practised in the North of England and was much sought after, especially by prominent Yorkshire families who were competing with each other to build the most beautiful new country houses. The foundations were laid in 1759, and by 1765 the house was almost complete and in the same year Rober Adam had his designs for the interior of Harewood House approved. The exterior landscaping was carried out in 1775, by Lancelot “Capability” Brown. The work took seven years to complete and included Brown’s plans a 32 acre serpentine lake, cascade and encircling carriage drives which you can still see today.

Unlike other country estates, such as at Croome, the medieval church was spared from demolition and became the family church of the Lascelles family.

The Princess Royal was particularly close to her eldest sibling, the Prince of Wales, known as David to his close family, who subsequently became Edward VIII. The abdication crisis which saw her brother give up the Crown so that he could marry the woman he loved, Wallace Simpson, who was thought to not be an acceptible bride, due to her being divorced. After his abdication, Edward VIII became the Duke of Windsor, and the Princess Royal and her husband went to stay with him in Austria. She was one of the few members of the Duke's family who would meet with his wife, The Duchess of Windsor.

Harewood remained their home, and continued to remain the Princess Royal's home following the death of her husband in 1947. Following his death, she remained active in public life and became the Chancellor of the University of Leeds in 1951 and continued to carry out official Royal Duties at home and abroad including representing HM Queen Elizabeth II at the Independance Celebrations of Trinidad and Tobago in 1962.

The Final Resting Place of the Princess Royal

Following a visit in March 1965 to see her brother, the Duke of Windsor, who was recovering from eye surgery in London, she returned once again to her home at Harewood.

On March 28 1965, whilst out on a walk around the grounds of Harewood House with her eldest son and his children, the Princess Royal suffered a fatal heart attack. She was 67 years old.

Following her death, she was laid to rest in the family vault at All Saints Church following her funeral. At her funeral were members of her family and the Royal Family including, HM Queen Elizabeth II, Prince Philip Duke of Edinburgh, Prince Charles the Prince of Wales, Queen Elizabeth the Queen Mother and Princess Margaret. During her lifetime Princess Mary witnessed the reigns of six British Monarchs: Victoria, Edward VII, George, Edward VIII, George VI and Elizabeth II.

Her funeral and burial, and memorial service at Westminster Abbey were national news and you can watch the newsreel below.