A church home to Royal Wreaths and Coronation relics

Follow in the footsteps of a King: Discover the Coronation Carpet of King Edward VII at All Saints' Church, Nuneham Courtenay in Oxfordshire...

This stunning church was built in the 1760s by Solicitor-General Simon Harcourt as part of the landscaped park for Nuneham Park House.

Built to a classical design, with a gleaming dome and six slender columns, the church is as magnificent as its setting overlooking the Thames.

Inside, All Saints is a monument to wealth and taste, with Italian fittings, magnificent memorial sculptures and busts. Look for the child among the bluebells - a beautiful and moving lifesize memorial.

Albert Edward, Edward VII, was King of the United Kingdom of Great Britain and Ireland and the British Dominions, and Emperor of India, from 22 January 1901 until his death in 1910. He was the Great Grandfather of HM Queen Elizabeth II.

He was the eldest son of Queen Victoria and has heir apparent to the Throne for almost 60 years.

The Coronation of his mother in 1838 at Westminster Abbey had not been planned and was somewhat underwealming. Successive Jubilee Celebrations however, paved the way for a grand Coronation for Edward.

Although he became King upon his mother's death in 1901, it wasn't until the following year in 1902 that he would be crowned King.  In December 1901, an Executive Coronation Committee was formed, working closely with the King to set the agenda for the event. On 9 August 1902, King Edward and his wife, Alexandra, were crowned King and Queen in a lavish ceremony at Westminster Abbey.

The service was taken by the elderly and frail Frederick Temple, Archbishop of Canterbury. He adamently refused to delegate any parts of his role and actions during the service and so had to be aided by two bishops throughout the ceremonies. His eyesight was deteriorating to a point where the order of service had to be printed in a large typeset on 'prompt scrolls' just for him.

Things didn't go to plan for the Archbishop of Canterbury as after kneeling down to pay homage to the King, he found that he was unable to rise and had to be helped up by the King himself and several bishops. He also, rather embarrassingly placed the crown on the King back-to-front. Clearly flustered, a well-meaning colleague approached the Archbishop and asked if he was okay, to which the Archbishop gave a short, and rather loud response heard by the congregation of "Go Away!" 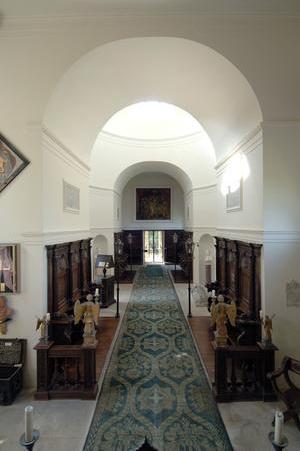 One of the Coronation Carpets to have been used at Westminster Abbey for Edward VII was given a new home at All Saints.

As you can see, the carpet runs the entire length of the church and features beautifully woven coronets and regal arms and symbols.

The church also is home to two surviving wreaths used at the funeral of King Edward VII in 1910.