Centuries of Art in Stone

The outsides of churches can be just as interesting as the insides. First of all, the setting can be exquisite. Perched on hilltops surveying the landscape below or scowling at the salty sea, they wait patiently for a visitor to stumble upon them. St Nicholas’s, Saintbury, Gloucestershire commands tremendous panoramas from Bredon Hill to the Malverns, some twenty-five miles away, while the ivy-cloaked ruins of St Andrew’s, Covehithe balance on the edge of Suffolk’s crumbling coast.

The outsides of churches really let you understand how the building was chopped and changed over the centuries. Forbidding blocked up doorways, quirky arches that go nowhere or sharp lines of lost roofs allow you to imagine how the church used to look.

Below, is St Peter’s, Sandwich, Kent. The south aisle was destroyed in the 17th century when the tower collapsed. The aisle was never rebuilt but ghosts of the former structure haunt the building. 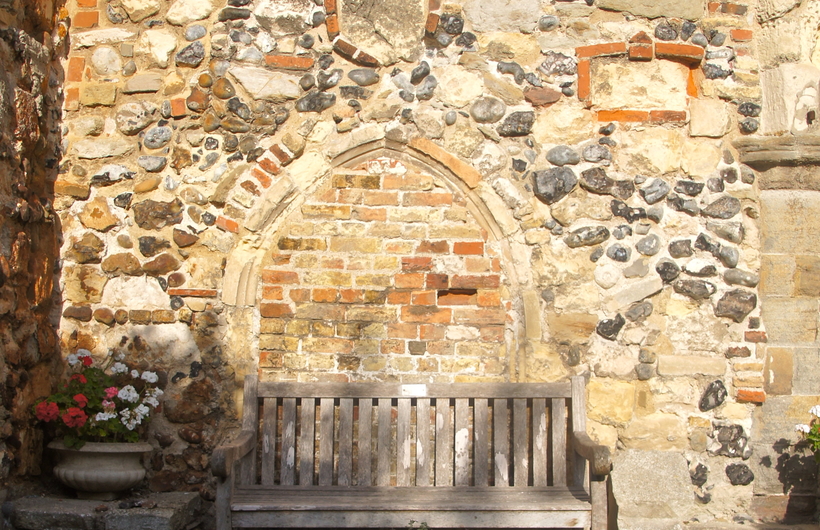 Equally interesting on exterior elevations are recycled pieces of masonry; that is stonework which has been pinched or reclaimed from other buildings or monuments. St Andrew’s in Wroxeter is an example of this, with sections of Roman columns and Saxon carved crosses neatly packed in to the walls! The weirdest and most wonderful example of this, however, is St Andrew’s, Bywell in Northumberland. Here, magnificent early Medieval grave slabs depicting swords, shields, a hunting horn, shears and a book are set in to the walls of the church.

No tour around the outside of a church would be complete with considering the rich carvings. This can range from intricate window tracery, riddling tympana or gurning gargoyles and grotesques. Exposed, these features can often be quite weathered with their details softened, but you still get an appreciation for the skill of the craftsperson who carved it centuries ago.

An interesting thing to hunt down on the outside of churches are mass-dials. These were brought to England by the Saxons and were generally etched into south-facing walls to catch the sun were roughly the size of a dinner plate. Whilst their form varies, these are usually incised circles, arcs or dots with scratched lines radiating from the centre-point where the gnomon would be. Gnomons are the element, which projects at a right-angle from the centre of the dial and indicates the time of day by the position of the shadows cast.

Finally, before you step inside, spare a moment for the door. Often pushed aside without a second glance, many church doors are far from simply functional. Heavy medieval doors have enough locks, hinges and bolts to make Alcatraz look escapable! Many doors are richly decorated with carved faces, figures and architectural features. The doors at St Nicholas’s Chapel, King’s Lynn and St Mary’s, Higham are some of the wonders of our estate.

Let us know your favourite features in the comments below or share discovered wonders from your next visit to a historic church with us on Twitter @theCCT.