A Saxon church built on the Roman site of Viroconium

St Andrew's is built on the Roman site of Viroconium, the fourth largest town of Roman Britain, and the evidence for the ancient town is everywhere. The gateposts are made from two Roman columns; the walls contain massive Roman stones; and the huge font is made from an inverted Roman column base.

The church is an archaeologist's delight. Though some of the building dates from before the Domesday Book (1086), it has been altered and enlarged throughout the centuries. The interior dates mostly from the seventeenth and eighteenth-centuries, with some excellent woodwork in the box pews, pulpit and altar rails. Inside the church are three wonderful sixteenth-century alabaster tombs - each has a lifesize, and eerily lifelike, painted figure lying in repose. The earliest and finest commemorates Sir Thomas Bromley and his wife Mabel. He was Lord Chief Justice, and is shown in his lawyer's attire, while his wife wears a fine headdress. On the front of the tomb is the charming figure of their daughter Margaret. Margaret's own tomb is opposite that of her parents, alongside her husband Sir Richard Newport, who wears full armour. Their mourning sons and daughters are shown below.

Other fine tablets and memorials are well worth seeing, and so too is the splendid Royal Arms of 1765.

A contribution can be made towards the conservation of the church by texting WRO to 70970 to donate £5, or 70191 to donate £10. Thank you for your support

This is a Champing™ church. 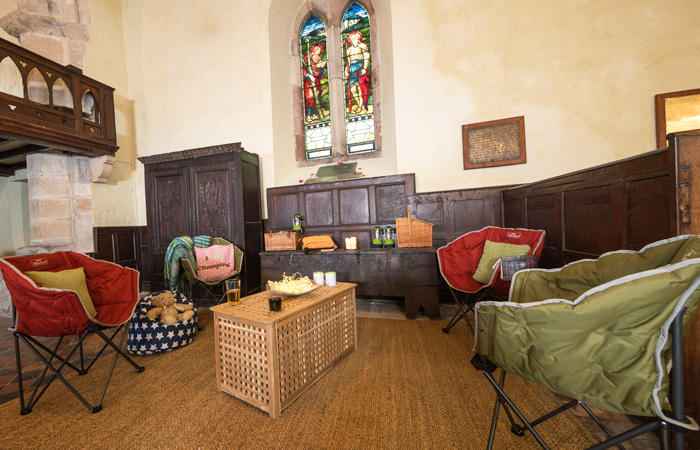 Stay at this Church

Experience this church in a different way...

For as little as £3.50 a month you can help save historic churches and keep history alive