All Saints' Church stands on Jesus Lane in the centre of Cambridge, its spire a prominent city landmark. The interior of the church, with its brightly-painted walls and ceilings, is a celebrated example of early Arts & Crafts design, created by Victorian architect, GF Bodley. The church also has links to William Morris through some of the stained glass and Bodley was a friend and colleague of Morris. 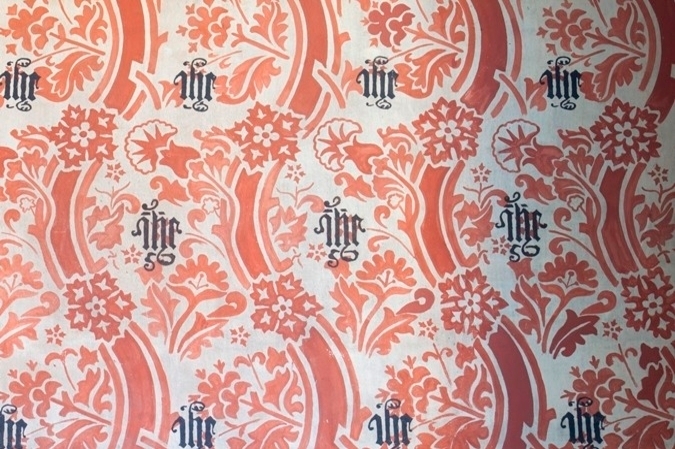 Above, a detail of one of the stencilled walls at All Saints'

Less well known is the collection of Victorian textiles held at the church, one piece of particular note being a curious banner that was discovered in the vestry.

The banner discovery generated much discussion amongst staff and volunteers and inspired volunteer Margaret Waring, who has a particular interest in historic textiles, to do some detective work.

The banner is made of canvas with painted text, the edges being bound with pale yellow silk tape and the lower edge finished with a green wool fringe.

Linda Parry, former Deputy Keeper of the Department of Furniture, Textiles and Fashion at the V&A had visited All Saints and suggested that the banner is not dissimilar to secular and political banners of the late 19th century.  For example The Hammersmith Socialist Society’s banner probably made by May Morris (daughter of William Morris) and now in The Marx Memorial Library in Clerkenwell, London.

It is certainly the same shape and size and contains lettering, and unusually for a church banner, no embroidery or iconography.

There are 3 phrases, reading from the top:

“All Saints” in Old English Text

“A threefold cord is not quickly broken” in cursive writing

Below the writing is a stylised Maltese cross.

“Though one may be overpowered, two can defend themselves. A cord of three strands is not quickly broken”

The three-fold cord quotation has been used to denote the Trinity but here it seems to refer to the three words above. The writing is itself a painted cord as though embroidered.

The central three words were used for political purposes in the mid to late 19th century and possibly come from a statement by Baruch Spinoza some 50 years earlier.

“The safest way for a state is to lay down the rule that religion is comprised solely in the exercise of charity and justice, and that the rights of rulers in sacred, no less than in secular matters, should merely have to do with actions, but that every man should think what he likes and say what he thinks.”

The beginnings of a political movement

The three key words were adopted by Frederick Denison Maurice, John Ludlow and Charles Kingsley of the Christian Socialist Movement. Their aim was to provide solutions to the social ills of the Victorian age through education, emphasising the collective responsibility of society to deal with economic problems.

William Morris was also a Christian Socialist together with Burne-Jones and Ford Maddox Brown. However he discarded the notion of the religious element and went on to form the Socialist League.

So why the link with All Saints? A series of photographs in the vestry may hold the answer. Here, previous incumbents look down from the walls, each no doubt with their own interesting stories. Were any of these involved with the burgeoning political movement?

We know that Brook Foss Westcott, who was Regius Professor of Divinity at Cambridge towards the end of the 19th century, was a founder of the Christian Social Union in Cambridge. Westcott has close links to All Saints and is even shown in one of the stained glass windows. It is possible that the banner was made and used in Cambridge sometime between 1870 and 1890.

On a recent visit to the church by the Textile Society, the back of the banner was photographed and the name ‘Clarke’ was discovered and the address ‘King Street’. King Street runs parallel to Jesus lane, behind All Saints. Could Clarke have had a shop on King Street?

There is still further research to be undertaken and unanswered questions:

Why painted on canvas and so utilitarian compared with other church banners?

Why the unusual shape and size?

Is it a fore runner of the banners of the Socialist League?

When was it used by the church?

When was it made?

Were any of the priests at All Saints members of the Christian Socialists?

We’d love to hear your thoughts or if you’ve got any information as to the history of the banner.

The banner isn’t normally on display to the public, as it’s so fragile, but we’ll be having a special talk, given by Margaret on Saturday 29th July at the church. During the talk there will be an opportunity to view the banner and take part in a discussion of its origins. We’ll also be looking at the wider collection of Victorian ecclesiastical textiles at All Saints, not normally on display to the public. Find out more and book online here.

Find out more about All Saints'