The extraordinary life of Anne Lister

On Saturday 24 February, a special event at York Holy Trinity will commemorate one of Britain’s most important pieces of LGBT history. As part of York LGBT History Month, the extraordinary story of Anne Lister, ‘Britain’s first modern lesbian’, will be told through a talk from her biographer Helena Whitbread, followed by a screening of the BBC drama The Secret Diaries of Miss Anne Lister.

Unearthed from their hiding place behind a wall in Shibden Hall near Halifax, the diaries of pioneering Yorkshire landowner Anne Lister (1791-1840) were an astonishing discovery. Running to over four million words, and partly written in a code of her own devising, they reveal the story of Anne’s remarkable life and her passionate relationships with women.

Anne was ahead of her time professionally as well as personally. Inheriting the Shibden Hall estate in 1826, she took its care seriously and devoted much of her energy towards its improvement. She redesigned the original timber-framed medieval manor house, and created areas of parkland and a fashionable ‘wilderness garden’ within its 400 acre grounds.

The estate produced income from its timber, stone, and rents, but Anne’s decision to open her own coal pits rather than leasing her land to others brought her into direct competition with the industrial interests of Halifax. Her business flair, as well as her plain, masculine dress and gentlemanly manners towards women, earned her the taunting nickname of ‘Gentleman Jack’ within the town, but this did not deter her from living consciously according to her wishes. 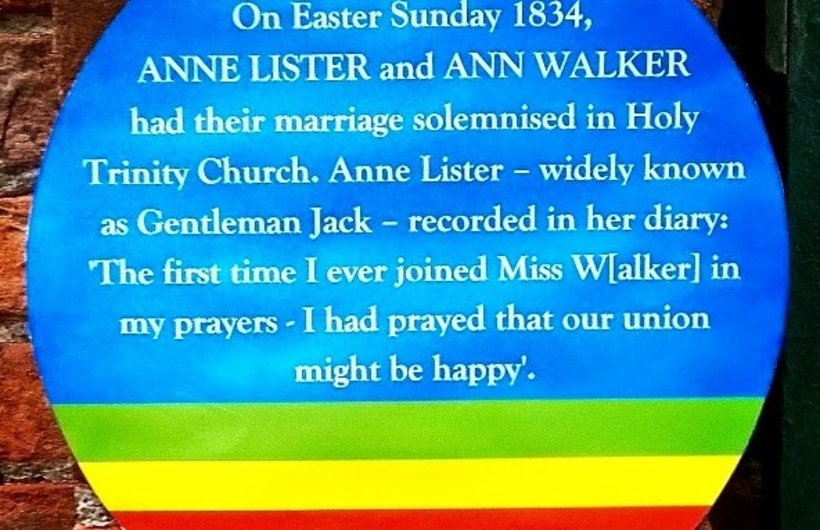 ‘I know my own heart’

In 1821, Anne wrote in her diaries: ‘I love, & only love, the fairer sex & thus beloved by them in turn, my heart revolts from any other love than theirs.’ Her sexual love affairs with women started in school, and continued through her entire life.

In 1834, Anne Lister and her partner Ann Walker exchanged rings and vows in private before taking Holy Communion together at Holy Trinity Church. In their opinion, this united them in a state equal to matrimony in the eyes of God. Anne and Ann’s celebration of their partnership in this way is a striking story in a country that would not legalise same-sex marriage until almost 200 years later.

As part of York LGBT History Month, join us at Holy Trinity to commemorate this powerful moment in history. You’ll have a chance to learn more about Anne’s fascinating life from her biographer, the historian Helena Whitbread, who decoded and edited Anne’s diaries for publication. Helena’s talk will be followed by a screening of The Secret Diaries of Miss Anne Lister, starring Maxine Peake.