A 5 and a half mile walk through fields and woodlands featuring St Michael's Church, Clapton-in-Gordano

Walking from the hall in an easterly direction, take a waymarked path on the left for a 10-15 minute walk to the Cadbury Camp site. The path starts quite narrow with a fence on the right and backyard orchard to the left. At the stile take the direct route up the steps ahead and a steep climb to the National Trust site. On the way up look back to view Tickenham, Nailsea and Kenn Moors SSSI and beyond, and enjoy the rich yellow, scented gorse.

From here follow the waymarked Gordano Round down through the woods, with the M5 below, to the bridge, where there is a good view towards Portishead and the Bristol Channel. Cross the bridge over the M5 and follow the path with the motorway on the right to a kissing gate. From here walk over a number of paddocks, some with horses in, through a series of metal gates to a grassy lane which goes down and around to the left by the livery stables and out onto Clevedon Lane. Turn right and follow the corner around to see Clapton Court on your right and look above to the tower of St Michael’s Church. Follow the track up to the lych gate to enter the churchyard.

On leaving St Michael’s, cross the small car park to the kissing gate waymarked Gordano Round. With horse fields on both sides look to the left across to Clapton Moor and Weston Big Wood and Portishead beyond.

This path has rich red earth underfoot. After passing through another gate there is a junction of paths. Take the one to the right, up the side of a field with houses on the left opposite woods to the right. At the top there is a stile on the left, leading to a grassy path, then farm gate and then down a short, surfaced slope to Wood Lane.

At Wood Lane turn right and up through the tunnel under the M5 where cars are sometimes parked. Beyond the tunnel on the right is The Old Rectory and remains of a medieval Priest’s House. After a short way is another path junction. Take the waymarked Gordano Round to the left following the lower edge of a wood. There are views here across open country to Portishead, Bristol Channel and both Severn Bridges.  The path is good and goes through a gate into the woods, then up a slight slope through the trees, coming out onto a track at the top.

Look to the left a few metres to see a mysterious ‘bomb’ and then continue back down the track past Naish Farm buildings on the left and pond to the right where Dunhill Well was historically situated. After going through two gates and fields with sheep the path comes out onto Cadbury Camp Road. Here look across to the right and take the bridleway across the road.

This track (Old Lane) is very peaceful in contrast to the Clapton side. It starts with tall fences either side opening to woodland and a steep slope down to the left which then opens to a large green valley with sheep in the distance. As a path joins from the right, go left over a good stile into the field and a well-trodden path that goes diagonally downhill with Abbot’s Horn woods to the left. At the bottom go through some gates and over the Hinkley Project ‘works’ area, following the pedestrian path. Through a gate the other side there is a well-trodden path through a sheep field that comes out on Tickenham Hill. Turn right, walking a short way to cross the busy junction with Clevedon Road. Take a footpath waymarked ‘Somerset public footpath’ immediately on the left through Stone-edge Farm and a latched gate.

To the east of the path is a possible site of a medieval village. Looking west, see the spire of the Church at Tickenham. Go through two gates and across a small bridge and turn right to the west walking alongside Land Yeo River, which rises at Dundry and flows to the Bristol Channel at Clevedon. At Church Lane turn left towards the Church of St. Quiricus and St. Julietta

From the churchyard turn left passing Tickenham Court and left again through a gate onto a footpath which goes diagonally across a field towards the river. Here turn left before the footbridge and follow the river past the sluice at medieval Tickenham Mill. Then turn right across the bridge and up a shady path to the main Clevedon Road, and a short walk back to the Village Hall.

Cadbury Camp Iron Age hill fort
Now a National Trust site. Probably constructed in the sixth century BC and occupied until the mid first century AD. Cadbury Camp was built by a local community which later became part of the larger Dubunni group. They chose the site for their fort because of its high position, giving good views of the land below.

Clapton Court
Sitting below St Michael’s Church this old manor house also retains mediaeval features Dated back to 1086 in Doomsday book records, the manor of ‘Clotune’ was held by Algar before the Norman Conquest and by Herlwin, a subtenant of the bishop of Coutances.  The Arthur arms you see on the front of the house are of the Arthur family who were the manorial lords from 12th to the 16th centuries. When you visit the church look out for the same Arthur arms beneath the chapel arch and on the chancel arch.

Clapton Moor
Managed by Avon Wildlife Trust is open to the public to explore. Set within the Gordano Valley, Clapton Moor is characteristic of the North Somerset Levels landscape.Networked with species-rich rhynes (watery ditches), the moor is important for its breeding waders and wintering wildfowl.

Church of St Quiricus and St Julietta, Tickenham
Can be dated definitely to the late 11th century by its early Norman chancel archway, but the nave walls may well be of Saxon origin due to their height and narrowness. There is visible evidence of alteration, extension and restoration to the church which happened during the 13th, 14th, 15th and 19th centuries. Read a brief history of the church.

Tickenham Court
A medieval farmhouse, restored by the Historic Houses Foundation, was originally home to a cadet branch of the Berkeley family of Berkeley Castle. In the 17th century Eleanor Glanville lived there. She had a special interest in butterflies and her name lives on in the Glanville Fritillary which can be found in the surrounding meadows. 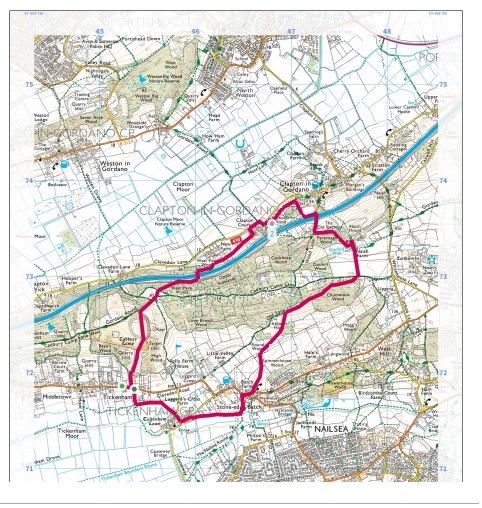 Thanks to Volunteer Historic Church Trails Assistant Helen Johnson for documenting this walk.