The Prime Minister's office today announced that Reverend Canon Timothy Goode has been appointed a member of CCT's Board of Trustees, by appointment of Her Majesty the Queen, with effect from the 1st of November 2020.

Tim studied Music at Huddersfield Polytechnic and trained as a secondary School teacher at the Roehampton Institute. He was Director of Music of Homefield School from 1995-2007. He trained for ministry at Ripon College Cuddesdon and served his title at Croydon Minster, in the diocese of Southwark and was ordained priest in 2010.

From 2012-18, Tim was Team Vicar of St Luke’s Whyteleafe and St Peter and St Paul, Chaldon, part of the Caterham Team ministry. He is presently the Rector of St Margaret’s Lee and also the Disability Advisor to the Southwark Diocese. Tim is a member of the National Disability Task Group, which advises the Archbishops on disability issues and is a member of the General Synod. He was made an Honorary Canon of Southwark Cathedral in September 2020.

The Queen has also approved the re-appointment of Ms Susan Linda Wilkinson and Mr Graham William Donaldson as Members of the Churches Conservation Trust for a second term until 30th June 2023.

Sue was an executive board director at the National Trust until the end of 2016 with responsibility for leading on membership, fundraising, volunteering and participation; she was also the Trust’s executive lead on tourism. Sue is Deputy Chair at the Churches Conservation Trust, a Commissioner at Historic England and a Trustee at English Heritage, Canal & River Trust, and the Medical Research Foundation. She was a Board Director of the Association of Leading Visitor Attractions (ALVA) until September 2020.  Previously she served on the Visit England Board and as a Trustee of the Institute of Fundraising.

Born and raised in Western Canada, William Donaldson moved to the UK to read Theology at the University of Wales. Following an early charity-sector career in property management with the Diocese of Gloucester, he became a founding shareholder and Chairman of Mainstay Group, gaining a wealth of experience in managing large teams delivering industry-leading customer service and innovations. Having undertaken several successful joint venture projects in Real Estate, William recently led the sale of Mainstay Group to FirstPort the UK’s largest residential property services group. He continues an active involvement in business especially within UK Real Estate. William is delighted to be involved with Churches Conservation Trust, bringing together his love for churches, architecture and entrepreneurship.

“I am delighted to welcome Tim Goode onto the CCT Board of Trustees. Tim brings a wealth of experience to the Board and we are grateful to have his insight to help shape the future of CCT. I am also pleased at the re-appointment of Will Donaldson and Sue Wilkinson. Like many organisations CCT has faced trying times this year, and the energy and commitment of our Board of Trustees has been, and will remain, crucial to supporting CCT through these unprecedented circumstances." 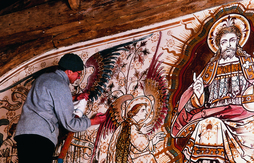