St Mary’s Ayston in Rutland came into our care in 2014. The rural church was re-opened in summer 2015 after nine months of repair costing almost £450,000. When a church comes into our care our aim is to make it structurally sound, weathertight and well presented for visitors. We also work closely with the local community throughout the project which will help maintain local support of the building in future.

At St Mary’s the roofs in particular were in a terrible state partly due to the lead sheets being both oversized and reaching the end of their useful life, but also because concrete had been used to repair the parapet gutters sometime in the 20th century. This had encased wall plates, truss and rafter ends leading to significant decay and beetle infestation. Alongside reroofing work included masonry repair and repointing; a complete overhaul of above and below ground drainage including lowering ground levels and installing soakaways; improved access into the tower to aid maintenance; glazing repair; plaster repairs and redecoration, interior work to floors and pew platforms; repairs to fixtures and fittings; and wall painting conservation.

The site has been in ecclesiastical use since the 12th century and there is likely some surviving masonry from this period at the west end of the nave. The main body of the church is 13th century, with additions in the 14th and 15th centuries when the tower and clerestory were built, the chancel re-built and the south porch added.

Other significant alterations include reroofing the chancel in 1721, re-seating the nave c.1850, a restoration in 1928. Finally, James Finch of Ayston Hall was the patron of the re-ordering of the chancel in 1937 by Leslie Moore. The church is fully furnished and of particular interest are several stained glass windows and visible fragments of wall painting. 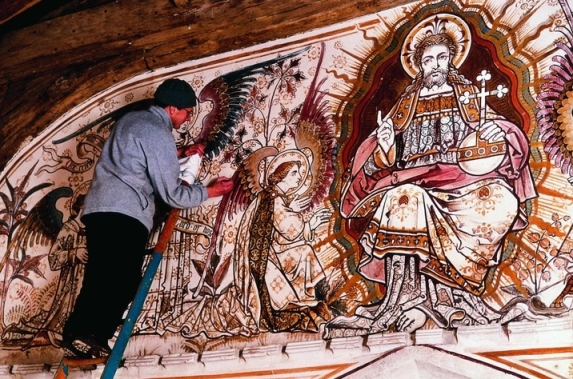 Our members are group of like-minded individuals who care passionately about saving historic churches. Joining costs just £3.50 a month.