It's Volunteers Week and we’d like to take the time to say thank you to all the amazing people who voluntarily give their time to help us look after historic churches. Due to the current Covid-19 crisis, our churches are all closed. However, that does not mean that the efforts of volunteers and Friends groups should go unrecognised.

Throughout the week, we will be sharing stories of volunteer-led projects, activities and care at CCT churches. Some from before the current situation, and some volunteering from home that’s taken place over the last few months. Here, we share the stories of two groups and one individual whose contributions have made such a difference to their local churches. 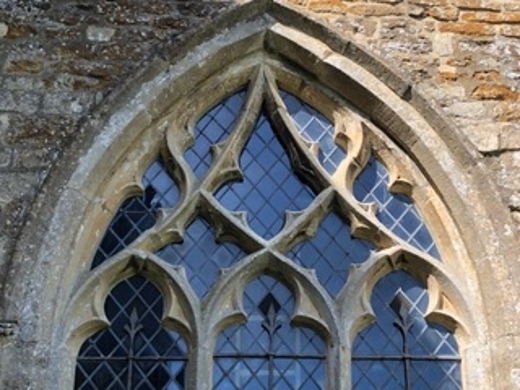 A window at last

The medieval church of St Michael and All Angel’s in Edmondthorpe, Leicestershire, has faced some challenges over the last few years. Including theft of lead from the roof and later storm damage. Earlier this year the north aisle window, which had been damaged during the lead theft, was repaired by a local specialist in stonework and glazing. These repairs were funded completely by the Friends of St Michael’s and All Angels,  a local group of volunteer supporters who proposed that the repairs to the window could be carried out by a local contractor.

CCT and the Friends worked together to identify locally based contractors and source quotes. The group undertook a series of events, including a pub quiz and open garden event at a local hall. The friends not only raised sufficient funding for the repair of the window, but also for the plastering of part of the south aisle wall effected by water egress, which will hopefully take place later this year. Following Friend's fundraising, a local contractor, whose credentials and quote was accepted by CCT, carried out the work earlier this year. This work would not have been possible without the fundraising efforts of the Friends of St Michael’s and All Angels’ whose generosity in supporting the conservation of their church means that St Michael’s is safe for future generations.

Dedication at All Saint’s

For over 20 years All Saints’ Church in Wordwell, Suffolk, has been supported by Robert Cairns. All Saints’ is six miles north of Bury St Edmunds and was restored by the Victorians between 1857 -1866. It has retained its stone carvings and a chancel arch from Norman times, as well as the 15th Century benches which have beautiful carvings.  Before the current situation Bob could often be found at All Saint’s to help visitors, answer any queries they may have and give a tour of the church, as well as help fundraise -  including organising much-needed parking for groups and events with a neighbouring farmer. Back in February Bob received a Certificate of Recognition at CCT’s National Volunteer and Community Day, in appreciation for his opening and closing the church every day and making sure it was spotless. All Saints’ and CCT are fortunate to have benefitted from Bob’s generous support for over two decades.

Bees might not be the first creature one thinks of when considering the animals found near churches. However, they have lived high up in the west wall of St Mary Magdalene Church in Tortington, West Sussex for a great many years. Each year, as part of their normal cycle of behaviour, the bees swarm at least once. For at least five years, the Friends of Tortington have attempted to catch one of these swarms.

In the words of John Morrison, Secretary of The Friends of Tortington Church “In some years, there was no sighting at all of the swarming bees but on other occasions, they have left during a Tortington event (quite exciting) but then picked the wrong tree to gather in!"  In other years, the Friends have watched the bees emerging in a large cloud but then had to watch them immediately fly off becoming no more than a small smudge on the distant horizon.  In the summer of 2018 things were different.  The bees cooperated and the Friend’s were able to catch a small cast. John Desmond, a determined volunteer, established an apiary and by May 2019 had three colonies (hives) living happily in a screened corner of the graveyard.  For two of the hives, numbers were still relatively low and no honey was removed.  For the third hive, copious amounts of wonderful summer flower honey were removed and bottled.  In return, all the bees in the apiary were well fed in the autumn with a sugar solution to see them through the winter.

In an extremely generous manner, John donated all honey sales to the Friends of Tortington Church and £500 was raised for upcoming work at the church, which has yet to take place due to the current situation. Hopefully, all three colonies will have survived the winter and will have built up their numbers and each provides two crops of honey for supporters of St Mary's to enjoy.

Thank you to all our volunteers and all the Friends groups across England who help support CCT in caring for historic churches. If you would like to support CCT during these uncertain times, please consider donating at visitchurches.org.uk/donate.