In Bury St Edmunds, local children are sometimes frightened by a macabre tomb and it is even referred to by some, as the tomb of Lord Voldemort, in fact this isn’t the monument to Tom Marvolo Riddle but is the tomb of a wealthy merchant called John Baret and like Alice’s tomb, there is nothing else like it in the world.

St Mary’s or to use its official medieval title, The Church of the Assumption of the Blessed Virgin Mary in Bury St Edmunds, Suffolk is one of England’s largest parish churches and it claims to have the second-longest aisle and the largest West Window of any parish church in the country! It was built as part of the great Benedictine Abbey of St Edmund, most of which is now in ruins, along with two other churches, St James’ which is now the Cathedral, and St Margaret’s which no longer survives. St Mary’s is home to many treasures including the grave of Bury’s Last Abbot, John Reeve (1514-39), the grave and tomb of Mary Tudor, Queen of France and favourite sister of Henry VIII, as well as one of England’s finest hammerbeam angel roofs.

With St Mary’s claiming to have the second-longest aisle in the country, a grand claim, you’d expect an equally grand roof and St Mary’s doesn’t disappoint; in fact, this roof which dates to the 1440’s has a remarkable collection of carvings and angels, 409 carvings to be exact, all of which miraculously escaped destruction and vandalism and the hands of William Dowsing and his soldiers during the civil war. As such, these figures look the same way they did when they were carved some 600 years ago. We can thank John Baret for these angels as he endowed them in his Will.

John Baret (d.1467) was a wealthy, and very well-connected cloth merchant. He shared a close and friendly relationship with the monk poet, John Lydgate and at Lydgate’s own request, Baret shared half of Lydgate’s royal pension. Lydgate's Patron was none other than Alice de la Pole, and Baret was well acquainted with Alice, they were distant relatives and in his Will he bequeathed a spoon to Alice.

Baret had this monument constructed in 1463, four years before his death. It is unusual and unique for a few reasons. Firstly, with the traditional Transi or Cadaver Tomb, we usually find a fully intact clothed human effigy on the top of the tomb, and a naked emaciated corpse below. Baret reverses this, and instead we find a full-sized naked emaciated corpse on the top, and on the side of the tomb, we find a miniature carving of Baret clothed along with the Lancastrian double SS collar.

Another reason why this tomb is so special, is that it once was part of the chantry chapel Baret had built. The ceiling survives and there is nothing else like it in the world. The ceiling is painted with Baret’s motto ‘Grace Me Governe’ and incorporates the letters SS, referring to a ceremonial Lancastrian collar given to Baret by Henry VI. Most spectacular however are the tiny holes that were drilled into the ceiling, into which glass mirrors were inserted, so that at night they caught the moonlight and thus Baret’s body could look up towards the stars of heaven which they represented.

The effigy of Baret's cadaver is beautifully carved, and conservation carried out by the Victoria and Albert Museum revealed that it was once polychromed, including green and red painted veins on his neck and hands. This tomb, as with all Cadaver tombs, was created for a single primary purpose, to secure prayers for the soul of the entombed from the onlooker. Although Baret endows a chantry along with Masses to be said for his soul in purgatory, Baret wanted to make it clear that he wanted people to pray for him. There are Latin inscriptions seeking prayers for his soul, but we also see script written in vernacular:

Wrapped in a sheet, as a full ruly wretch
No more of my mind to ward will stretch
From earth I came and on to earth I am brought
This is my nature: for of earth I was wrought.
Thus earth on to earth tendeth to knet
So endeth each creature: called John Baret
Wherefore ye people in way of charity
With your good prayers I pray you help me
For such as I am: right so shall you all be.
Now God on my soul: have mercy and pity. Amen. 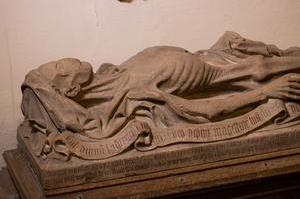 So if you are able to visit and see this wonderful tomb in person, why not say a prayer for the soul of John Baret.

See this monument and learn more about it, and several others in our new documentary! 'Medieval Death: Exploring Cadaver Tombs' launches on Monday 3rd January 2022 on our new streaming platform CCTdigital.com and will be available for members to watch. Join from just £3.50 per month, and know that your money doesn't just gain you access to great content, it helps to save and conserve historic churches!

Learn more about the benefits of being a member