The Rediscovery of the Edlesborough Rose Brass

In October 1983 Peter McKinnon stood in the chancel of St Mary’s church, Edlesborough. The air was still. A shaft of weak sunshine illuminated the dust dancing silently around him. He looked around the church he had been maintaining for the past ten years. The scent of bereavement hung in the air. The door, no longer upright, led a splintered walkway. A gaping hole yawned in the medieval slab before his feet; an accusation in its emptiness.

Kneeling on the numbing floor, he reached for his toolbox and felt around for a screwdriver. With much effort, he prized the rose brass from its indent, packaged it in a brown paper envelope and set off to Natwest Bedford to deposit it in the vault.

Late last year, out of the blue, I received a call from a woman named Catherine. She asked if I knew the whereabouts of the rose brass from Edlesborough church. I had never even heard of it. It was taken from the church in the 80s, she told me, brought to a bank after a spate of theft; she’d been tracing it for years but every trail went cold.

Intrigued by her phone call, I asked around. Lots of people had heard of the rose brass, some had searched for it, many had come to dead ends, others had drawn blanks.

It was lost in the mists of time. It was a mystery. The bank account never existed. It had been stolen.

Unperturbed, I rummaged through the vast archives before finding one thin sheet of paper that was the proof I needed.

Far from being finished, the search was now well and truly on. It led me through a labyrinth of de-vested churches, redundant charities, closed banks, closed bank accounts and former members of staff. Until in late January, it was finally located, I had gathered all the signatures I needed and it could finally be released. 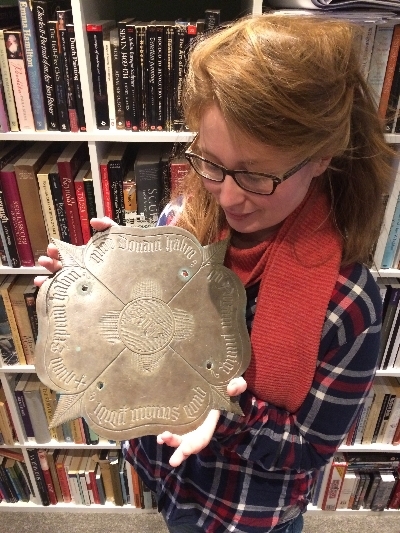 The brass dates to fifteenth century and is quite special, as it is the only known surviving brass in the shape of a rose. Records indicate that a rose brass of remarkable likeness existed at St Peters, St Albans – yet sadly, only the stone indent survives. The St Albans brass was situated at the feet of a priest.

Who the Edlesborough rose brass memorialises, however, remains a mystery.

Far from its Tudor connotations, the rose is an ancient symbol of love. It was used on brasses as a symbol of the Virgin Mary - of Marian love and of the eternal spring of medieval Paradise where Mary is Queen. The four petals are symmetrical and the intersection of the sepals creates a cross.

The inscription around the edge of the brass translates loosely to:

What I spent, I have had;
What I gave, I have;
What I refused, I am being punished for;
What I kept, I have lost;

Death - the great equaliser. Death unites us all. Earthly pleasures are false pleasures. Your rewards shall be in Heaven. 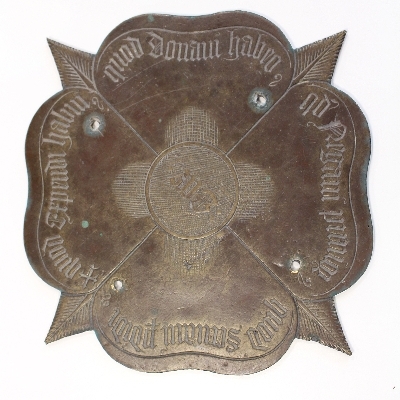 A sober lesson in morality and mortality, this reminds the passer-by that they soon will be in a similar state to the person below the stone. Death was ever present in the medieval mind in a world wan with plague, pestilence and famine.

Brasses often also pleaded for prayers to reduce the deceased’s time in Purgatory.

The rose brass tops the town signs throughout the area and is the badge of the local school, yet its whereabouts were unknown for decades. I feel so deeply honoured to have brought the rose brass home.

Little did Peter McKinnon know on that October morning all those autumns ago, that the brass would remain unseen for thirty-three years.

See our short film about the discovery of the Rose Brass