Volunteer Simon Lowther explores the history of St John the Evangelist in Leeds...

Like all our churches, St John’s in Leeds is packed to the roof beams with colourful and surprising history. History that we, the volunteers, have the pleasant duty of absorbing and retelling to curious visitors at the church. In particular, St John’s has plenty of thrilling history relating to its early years for us to get stuck into, this being very much of the swashbuckling variety – from bloodshed in the churchyard as Roundheads and Cavaliers fought over Civil War Leeds, to tales of gold coins hidden in ale tankards smuggled to an imprisoned King Charles.

But no history of St John’s is complete without reference to the two Rs. These are the Restoration and the Repatriation, two periods of significant renovation undertaken by the Victorians, which heavily influenced the church layout we see today. The first of these Rs came about in the 1860s, when trustees and parishioners, fed up with their outmoded and overcrowded church, drew up plans to demolish St John’s and build a new church in its place. These plans would surely have gone ahead, had it not been for the happy intervention of two great Victorian architects, Norman Shaw and Gilbert Scott, both admirers of this rare Caroline church. Together they persuaded the trustees to ditch their plans and settle instead for a full renovation of the church. Norman Shaw got the job of architect, but with the trustees breathing down his neck the entire time.

The Restoration, as it became known, was by Shaw’s own admission a 'dismal failure'. The St John’s that emerged was a shadow of its former self – pews cut down and re-cobbled together, chunks of richly-decorated screen removed, ancient ledger stones uprooted, and walls scraped bare of plaster to reveal the 'truthful' stone beneath, as per Victorian fashion. Despite this, Shaw’s Restoration did make some positive changes in the form of a new porch, an organ loft extension, and a nifty little vestry, where staff and volunteers have since enjoyed many a cup of coffee.

So what about the second of the two Rs? The Repatriation of the 1880s was what John Scott, the vicar at the time, termed his efforts to repair damage done during the Restoration. Beginning with Scott’s arrival in 1884 and continuing into the early-1900s under his successor, the Repatriation saw original cresting restored to the screen, the grand canopy replaced over the pulpit, and the tomb of church founder John Harrison rebuilt. The walls too were replastered – Shaw admitting in hindsight that the bare stone was "calculated to retain impurities and dirt of all kind" and had made the church "exceedingly dirty ... intolerably dark and most depressing".

Behind Scott’s Repatriation was an instinct to return St John’s as far as possible to its original state as an 'ancient' church. This he achieved through sensitive changes to the church still very much in evidence today. This same instinct is revealed in a series of paintings, part of a long-forgotten cache of artwork stored in the church tower, which it is now hoped will be preserved in an archive and digitised by volunteers for future use at St John’s. Significantly, these paintings date from the early 1880s, just prior to the Repatriation, but depict St John’s as it would have looked before the Restoration. In them, the church appears light and airy, with uniform pews at their original height still with their doors smartly attached, the pulpit jutting proudly out in its original position, and with elegant Georgians strolling along original stone-paved aisles. These works, by E. C. Booth and an artist known only by the initials 'H. T.', express longing for a St John’s lost after the 1860s Restoration and press for a renewal of the church in the spirit of its foundation. 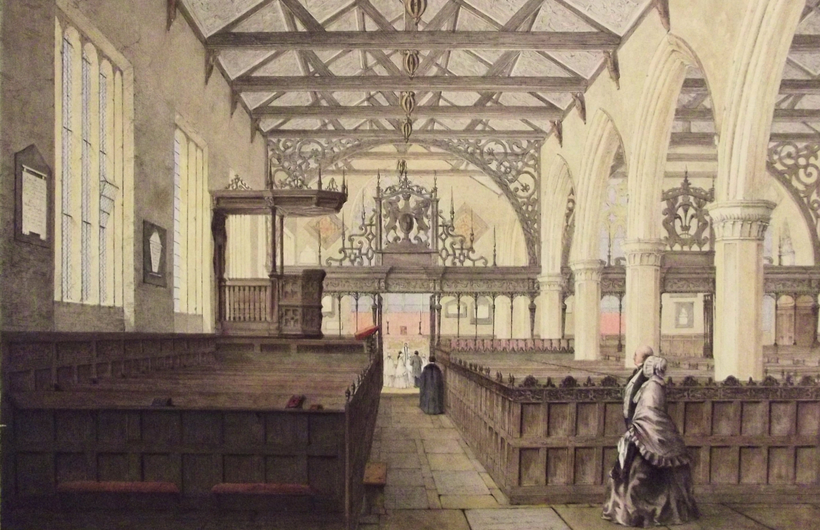 Longing for a lost church - pre-Restoration study of St John’s in Leeds, painted by E. C. Booth in around 1880.

But are these paintings really that accurate, or were they just rose-tinted nostalgia? The artwork in St John’s offers an interesting counterpoint in the form of a rare daguerreotype photograph, taken sometime before the Restoration. This photograph shows us the same view as in the paintings, but shadowed and enclosed by an unseen gallery lurking behind the photographer, which the paintings omit to acknowledge (the gallery was later pulled down during the Restoration). Whereas the paintings show neat pews and evenly-paved aisles, the daguerreotype reveals irregular pews and sloped, footworn aisles. 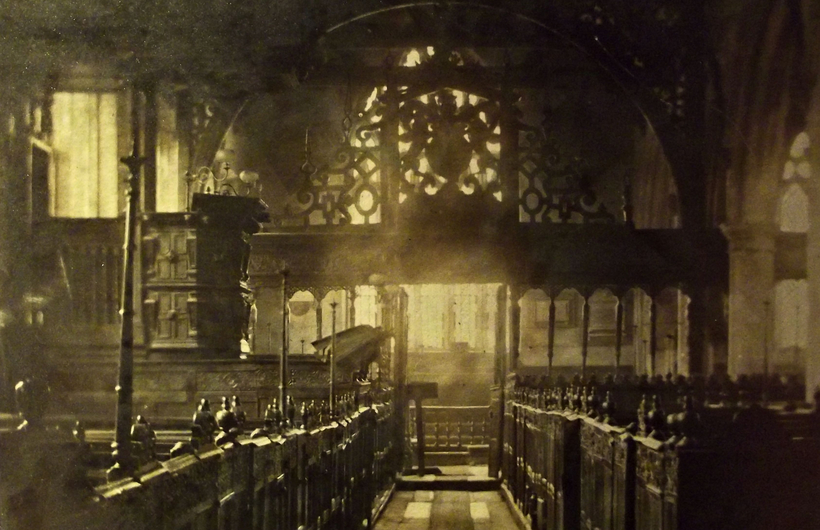 Charming as it might look to us now, this photograph does help us see why trustees in the 1860s thought a change was needed. And while the paintings may show us an idealised church that never quite was, still they are crucial to understanding the Victorian nostalgia that brought about the Repatriation and the St John’s that we see today.

Think you could help to preserve, digitise and interpret historical artwork at St John’s, Leeds? Get in touch with North Volunteering Officer Danielle Rowbottom at [email protected]