Volunteer Liz Howes tells us the story of Offord d'Arcy War Memorial, 100 years since the first service of dedication for the memorial was held.

On the 27th June 1920 a service of dedication was held for the Offord d’Arcy War Memorial in St Peter’s church.  The Friends of St Peter’s had planned to commemorate the 100th anniversary of this special occasion with an exhibition about the memorial and an evensong service in the church at the end of June this year.  However, with the current coronavirus situation these events won’t go ahead as planned.  Here, then, is the story of our war memorial. 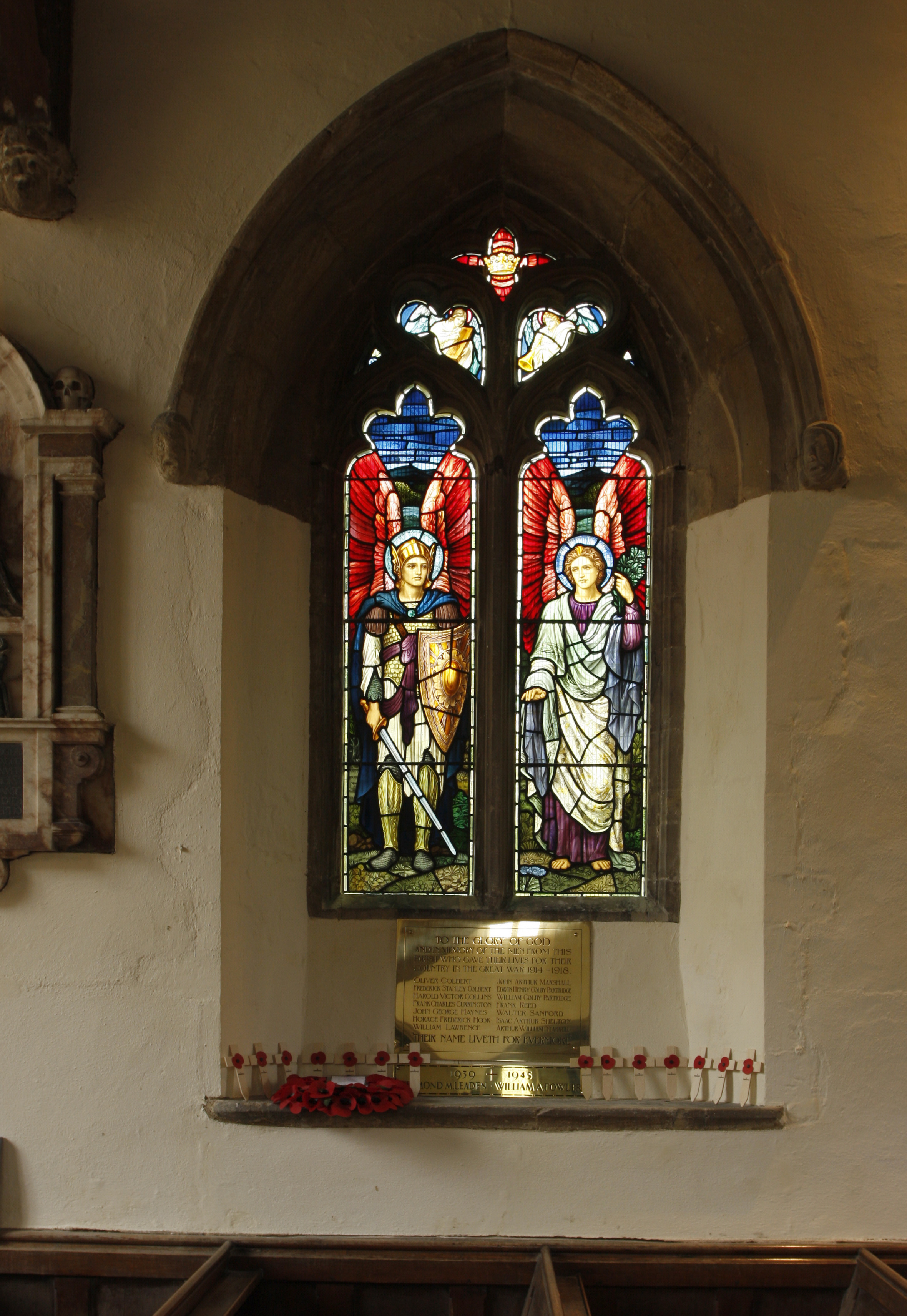 Papers held in the Cambridgeshire Records Office (CRO), Huntingdon Archives show the origins of the plan to erect a war memorial in Offord D’Arcy to the fallen of World War I.  The minutes of the Annual Easter Vestry on April 24th 1919 show the unanimous intention to place a suitable memorial in the Parish Church and that collections be made at the Church Services at suitable periods for this object.

A Special Vestry was held nearly a year later at which the following motion was passed unanimously.  “That this meeting of the Parishioners of Offord D’Arcy assembled in Vestry on March 8th 1920, hereby approves of the erection of a Memorial Brass and Window, (plans of which were submitted to the meeting) in the South Wall of the Parish Church of Offord D’Arcy.”  This was signed on April 14th 1920 by Rev Ernest V O’Connor.  It is worth noting that Rev O’Connor is shown on the Roll of Honour displayed in the church as having served in the Church Army during the war.

Before work can be done on a church the Diocesan Advisory Committee has to be approached for a faculty.  A faculty is required for all repairs, maintenance and changes to a church or its contents.  The faculty, held in CRO, states “In the Consistory Court of the Diocese of Ely - Offord D’Arcy Church Hunts - Faculty for a painted window with brass tablet and inscription as a war memorial - Granted under seal of office 17th June 1920”

The faculty shows that the estimate for the cost of the work of the window would be £124-10s, “which will be defrayed by subscriptions from the parishioners already received”.

The sum raised in a relatively short time was impressive in a village of largely agricultural workers, where many of the men of working age had fought in the war, 14 died, others returned injured or shell shocked.

With the dedication taking place just ten days after the faculty was granted it would appear that the window was ordered before final approval, possibly with the faculty being fast tracked for a war memorial.  It may not be a coincidence that the date of the dedication was also the Sunday when the church would have celebrated St Peter’s day.

Inside the faculty in the Records Office was a small, original water colour painting of the design for the window signed by William Glasby, the stained glass artist.  The Friends paid for a facsimile of this painting together one of the faculty and both can be seen in St Peter’s on open days.

Details of the dedication service were published in the St Neots Advertiser on 2nd July 1920.  The opening paragraph was:

Offord D’Arcy decided to honour and perpetuate the memory of her gallant sons who lost their lives in the War by a Memorial Window in the fine old Parish Church. This was unveiled at an impressive and appropriate Service conducted by the Rector Rev. E. V. O'Connor on Sunday evening, at which the church was filled to overflowing, seats having to be provided in the aisles for many of the congregation.

The hymns sung, the readings and the sermon were all reported, information which was to be used by the Friends many years later in 2013.

Moving forward nearly 100 years the Friends of St Peter’s started to research the history of the church.  It soon became clear that not only did the church hold the monument to the memory of the fallen of Offord d’Arcy but also a work of art made by the highly respected stained glass artist, William Glasby.  On close inspection it could be seen that the window was showing serious signs of age; the lead was deteriorating and bowing, leading to cracked pieces of glass and ingress of dirt.  The glass inside and out was dirty, hiding the beauty of the work.  If the window were not to suffer irreparable damage or indeed fall out, it was apparent that it would need serious remedial action.  As in 1920 funds would be needed to provide for the memorial.

In 2011 our committee determined to raise the money for the work.

In a similar way to 1920, nearly a century later the Offord community and friends rallied to our plea for help.  Our supporters were very generous, local companies contributed, the Friends were successful in an application for a grant from the War Memorials Trust and the final push came with a special Concert for Easter where everything was donated, the music and programmes, the singers’ time and effort.

Listed Building Consent was obtained to allow removal of the window to the conservators, Chapel Studio Stained Glass Ltd, where it was meticulously documented, dismantled, cleaned and repaired before being reassembled with new lead.  What had already appeared a wonderful window was revealed in all its glowing colours when it was re-installed in St Peter’s.

The brasses, the original from 1920 and a later one added after the Second World War, were removed from the church and taken to Eura Conservation Ltd where they were restored, given a protective coating and re-installed with special film to protect them from the damp and acid of the lime washed wall.

We hadn’t dared to hope that within less than a year of announcing our intention to rescue the window we would see not only the window but also the memorial brasses beneath fully restored and back in their rightful place in time for that year’s Armistice commemoration.  Rev O’Connor’s words of 1920, “every penny has been given gladly, freely, voluntarily,” held as true in the 21st century as they did then.

Having raised the money for the restoration the Friends organised a re-dedication service on Sunday 19th May 2013.  The psalm and hymns from the original service were used and the congregation was both surprised and delighted by a bugler sounding the last post from the organ loft.

In his address at the dedication service the Rev O’Connor said “From very early times the artist’s highest skill has found expression in colour and in metal and our Memorial is a happy combination of both”.

The window and the brasses remain a memorial to the fallen of Offord D’Arcy from both World Wars.  The glowing colours of the stained glass continue to delight visitors to the church and it is for these reasons we wished to commemorate this 100th Anniversary. 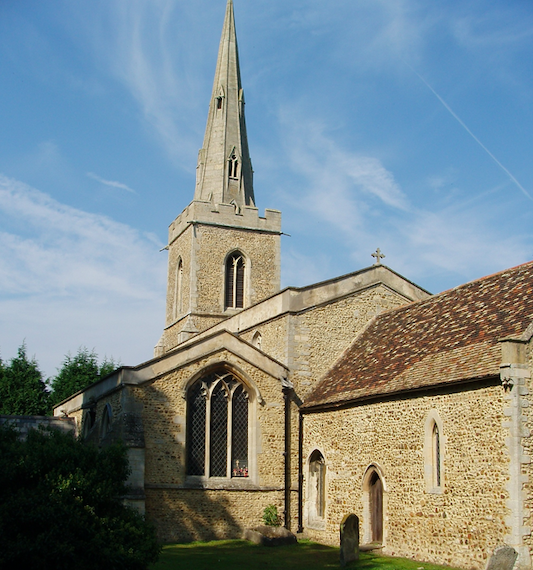