Church Monument of the Month - January 2021 - All Saints', Conington

All Saints', Conington with its fine tower stands watch over the surrounding countryside – seen both by the passenger in the train from King’s Cross to Edinburgh and by the driver on the nearby Great North Road. All Saints' tower truly is monumental.

But inside this church lies a treasure trove of monuments to individuals with fascinating stories such as Sir Robert Cotton, the celebrated antiquary whose assembled manuscripts formed the basis of the British Library.

The estate of Conington belonged to Maud, niece of William the Conqueror, who married David, son of the Scottish King Malcolm in 1109. Conington remained part of Scotland until 1237 and was eventually passed to the Cotton family, whose gloriously opulent monuments spanning three centuries are held in the church today, together with memorials to a Scottish king and a prince.

However, the monument we wish to draw your attention to is unique and it happens to have survived from the previous church which once stood on the same site and which was dedicated to Our Lady, not All Saints'. The present church dates most likely to the late 15th century. Domesday Book records the presence of a church close to here as far back as 1086. Laying on the floor of the South Chapel is the earliest monument in the church which was carved c.1330 and is likely to be an effigy of Bernard de Brus, the lord of the manor and patron of the church, who died 1332–33 in his early twenties.

The effigy is carved Purbeck marble and depicts the religious garments of a member of the Third Order of St Francis. The figure is vested in a long cowled habit with a knotted cord at the waist, worn over a tunic of mail, the head being supported by two cushions. The armour is particularly interesting, as under the cowl of the monk's habit can be made out a chain mail hood (coif) and above the hood we can make out a helmet (bascinet). Looking towards the now damaged wrists, we can again see the chain mail tunic and gloves which are being worn underneath the habit. This is what makes this particular monument so interesting and unique, a nobleman depicted wearing items of clothing that are completely at odds with one another, that of a religious monk and those of a knight ready for war. Why would this happen? The short answer has everything to do with the medieval understanding of death and sin. From the early 13th century people believed that living a holy life of a religious (Monk or Nun) would help erase sins and by extension, the wearing of the habit of a Religious would aid in sins being forgiven and so at the time of burial some people were even buried in religious clothing.

You can watch three lectures with experts that explore the topics of Medieval Death in much more detail:

A Tomb with a View: Medieval Death with Prof. Paul Binski - watch here

A Medieval Guide to Escaping Purgatory: The practices of the late Medieval Cult of the Dead - watch here 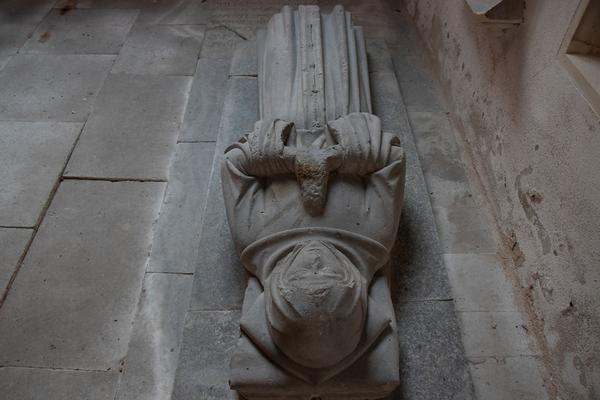