During the regeneration of St Mary on the Quay in Ipswich into Quay Place (which was recently completed) our heritage consultant spotted a strange feature embedded between the flints in the north wall of the church. It looked very much like the base of a bottle, made from a sort of matt black glass.

But why is it there?

We wondered whether it was a joke by a previous workman who had run out of flints to repair his wall and, rather than hop on his horse back to the quarry at Swaffam, chucked in an empty stout bottle which he'd downed (pre-health & safety days) with his lunch.

Then we heard about ‘witch bottles’...!

Yes, these are a thing. Apparently witch bottles have been found hidden in old buildings, as a means of protecting the inhabitants from witches and other evil spirits, which might enter the building and cause enchantments and curses to be placed upon them.

The method for such a preparation is to put a physical piece of the building’s occupiers into the bottle - such as clippings of their hair, nails or bodily fluids. This confuses any malevolent spirits bent on entering the building with malicious intents. Instead of casting their enchantments against the building’s residents, they’re mistakenly directed to the witch bottle, and are safely trapped.

The trick is in the concealment within the wall so the spirits can’t tell that it isn’t, in fact, a real person but a decoy.  Aha. Clever!

Can you spot our evil spirit trap among this wall? 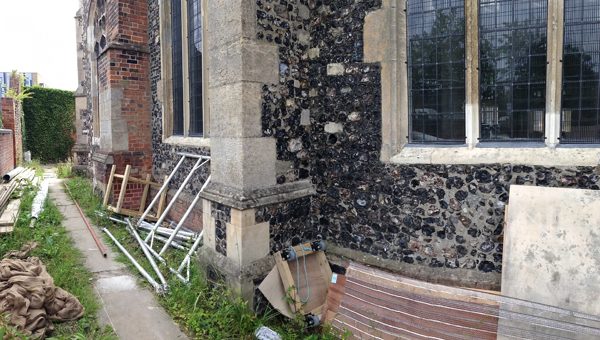