St Margaret's is a church from another time, standing in an isolated setting, as if still in its C12th Norman world. This church is not only one of the most important surviving intact C12th churches in the country, but it is also arguably the most complete Norman church in East Anglia, followed closely by Heckingham which is 2 miles away and is also a church under our care and protection. 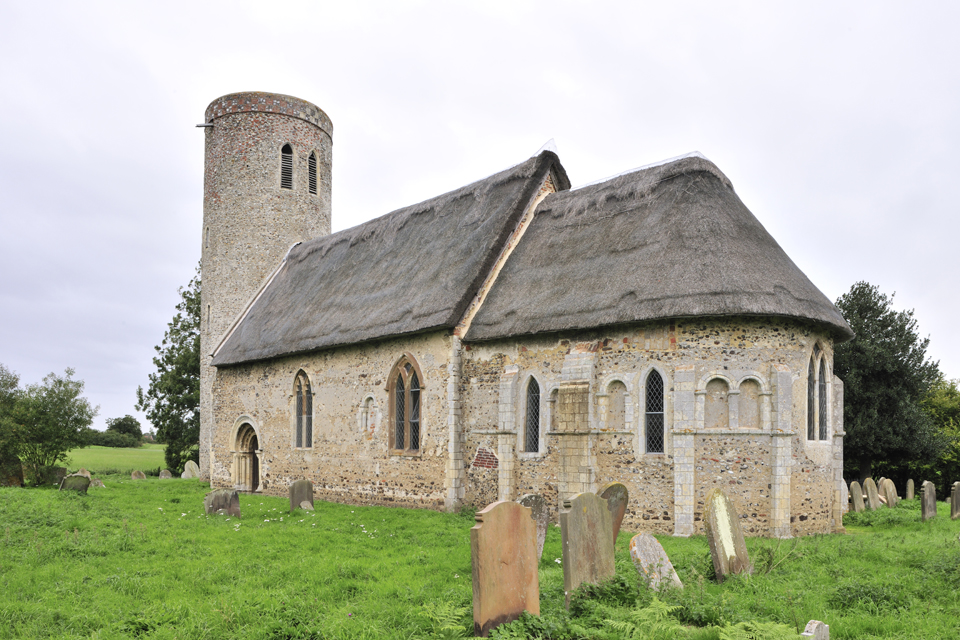 St Margaret’s as you can see is thatched, and has a round tower. Sadly, birds making their nests have removed thatch reeds from the roof of this church. This has left gaps for the weather to get in. We are raising funds to make the necessary repairs to the roof here and at nearby Heckingham, which will be carried out by a local thatcher.

The tower is worthy of mention, Norfolk Heritage, conducted a site visit in 2016 and on inspecting the tower it confirmed that the present belfry is a C14th addition; however the earlier belfry has internal Norman mouldings and Caen stone detailing; however, there remains the possibility that the base is actually Saxon. We know that this is a historically active site as there have been several archaeological discoveries on the site, including late prehistoric pottery found in the churchyard, along with Roman bricks and tiles.

On entering the church you do so via a beautiful C12th doorway. This magnificently carved doorway has bands of richly carved chevrons, zigzags, stars and rosettes over the arch which are breathtaking. Further around the church is another similar doorway, though less richly carved, in the south wall. Here you will also notice superb blind-arcade and decorative carvings on the exterior of the east end apse dating to c.1140. The stone used for the doorways is limestone and was imported from Normandy. 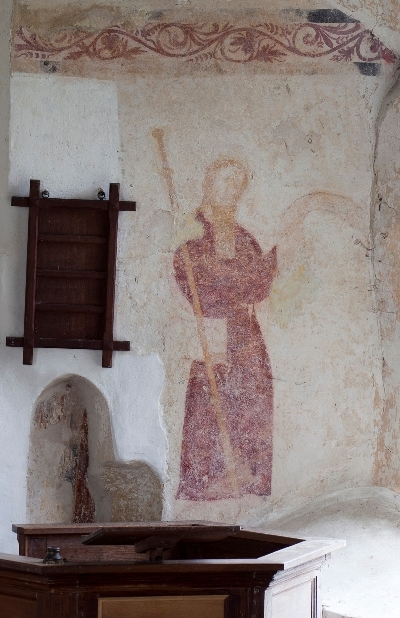 On the inside, St Margaret's, is equally impressive and breathtaking. The eye is drawn to the east end apse which is filled with light which illuminates the wonderful wall paintings dating from the C14th. Looking down and offering protection to those entering the church or passing by is the C14th image of St Christopher (patron saint of travel) with Jesus on his shoulder. The theme of travel and protection is reinforced by the Image of St James the Great, the patron saint of pilgrims, who is identifiable by the staff he is holding. This may indicate that St Margaret's was a place pilgrims may have stopped at on their way to Little Walsingham to visit The Shrine of Our Lady of Walsingham, England's most important Marian Shrine. Many other fragments of wall painting have survived including an angel with a trumpet to either side of the chancel arch, consecration crosses in both the nave and chancel, and decorative wallpaintings paintings in the chancel.

The nave and chancel are believed to have been built c.1140. Although the overall shape of the chancel remains unchanged, the east window was enlarged and the inside wall slightly flattened in the C13th when lancet windows were cut into the apse - this could be because there wasn't enough money to demolish and rebuild the chancel in the latest fashion to accommodate a larger East End window.

At the west end of the nave is one of the more modern additions to St Margaret's, a very well preserved C15th font. The font has an octagonal bowl, the sides of which are carved with angels holding shields alternating with roses. The base of the bowl has angel heads with outspread wings at each corner. The column and stem of the font are decorated with beautifully carved lions.