Many of us know something of the most famous battles in English history, but each and every battle fought on our soil throughout the centuries has played its part in shaping our society today.

Here are five sites featuring buildings in our care that mark an important English battle.

One of England's most famous battles, the Battle of Evesham was fought between forces in support of King Henry III and those of Simon de Montfort, Earl of Leicester. The battle was the end of a long-running campaign by de Mortfort to force Henry to share power with his parliament.

The battle started when lookouts at the Abbey spotted royalist troops to the north and De Montfort's force marched out to meet them from the site of St Lawrence's. Today you can follow their route via the well-marked Battle Trail.

According to chroniclers over 50,000 men fought in the Battle of Towton near St Mary's in Lead.  The battle was a decisive moment in the War of the Roses - the victor, the Duke of York, aka King Edward IV, displaced the Lancastrian King Henry VI.

It is described as "probably the largest and bloodiest battle ever fought on English soil" - with 28,000 men believed killed in action.

> View a walking route for this site 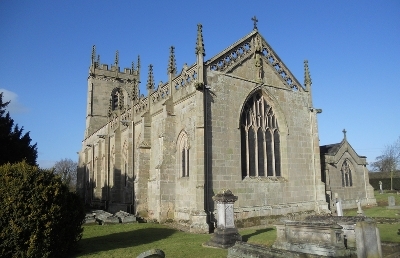 St Mary Magdalene's is a memorial church to a fierce and bloody battle between the forces of Henry IV and Henry Hotspur, in which the latter was killed. Over 1,600 people are thought to be buried on site. King Henry IV commisssioned a chapel, later replaced by this larger church, be built as a memorial for the dead on both sides.

Today a peaceful site, the church features information on the battle.

Fought in October 1642, the Battle of Edgehill was the first major armed conflict of the English Civil War, fought between the forces of the royalist Earl of Forth and the parliamentarian Earl of Essex.

Medieval All Saints' Church sits in a circle of trees on the hill, overlooking the battlefield.

Not a real battleground, but part of a historic battle-training ground. St Giles' Church at Imber on Salisbury Plain - one of the UK’s biggest military training areas.

While the MoD has been using the plain for training for more than a century, the village of Imber was vacated of residents in 1943 to provide an exercise ground for the invasion of Europe. Of course the plain is also famously home to sites of great archaeological significance.