A thousand-year-old church in the heart of modern Exeter

St Martin's props up the black-and-white building of Mol's Coffee House on a corner of Exeter's historic Cathedral Close. It is one of the oldest buildings in the city, consecrated a year before the Norman Conquest, and was once one of six churches clustered in the cathedral's shadow.

It is the most important and complete church in the centre of Exeter, having escaped both Victorian refurnishing and the Second World War bombing that severely damaged many other Exeter churches.

The first church on this site was consecrated on 6 July 1065 by Bishop Leofric, the same bishop who founded the cathedral in Exeter. Its tiny parish - smaller than the size of a football pitch - served the workers and traders who crowded into the three and four-storey houses in the surrounding streets.

The roughcast exterior of red volcanic stone with bright, white Beer stone windows makes it look a little bit like a fancy gingerbread house. Inside, it is simple and full of light. Look out for the communion rails with their closely set balusters designed, according to a seventeenth-century order from the Archbishop of Canterbury, to keep parishioners' dogs from reaching the altar!

The gallery has painted on it the arms of the city and of Bishop Trelawny, a local hero in Cornwall, who was imprisoned for libel by James II. There are also several magnificent monuments in the church including one of Philip Hooper (a benefactor who donated the reredos) splendidly bewigged, he kneels at a prayer desk with a skull and pile of books.

A Google 360 view of St Martin;s Church is available here. 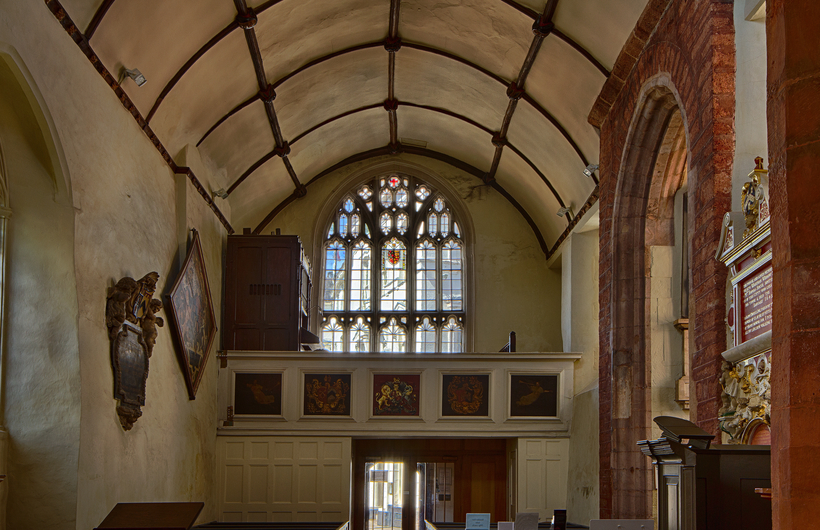