Go to Churches Conservation Trust
In this section

Here is a short summary of the history of St Swithun's.

The building as you see it today is largely the result of a rebuild between 1733-5 by the Woodwards of Chipping Camden. The nouveau riche traders of Worcester wanted a new place to worship which reflected their status and the medieval St Swithun's was in the perfect location at a busy junction and market district in the city. The rebuild was in classical style but with gothic touches which was the fashionable style at the time and the church was designed to be an oratory church, hence it's elaborate triple decker pulpit and box pews. The clock was a key addition to the new church to help oil the wheels of business in the area.

The first record of St Swithun's in Worcester is from 1126 when Bishop Eudo granted permission to a nearby Benedictine monastery for a church to be built on this land. The church at this time would have been built in Norman Romanesque style and several traces of this style have been found in the current fabric of the south wall. There is a stone which looks like it was part of a repeating X pattern and another which has the classic Norman zig-zag pattern on it. A Norman vousoir stone was reputedly found when a new door was knocked through the north wall in the early 1900s. 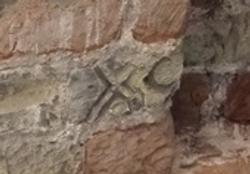 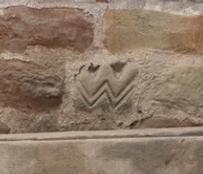 The south wall is largely rebuilt of medieval material whereas the north wall appears to be a standing medieval wall modified to accommodate the 18th century windows. The East wall was newly built in the 1730s and the West end is made up of the 15th century tower which was cosmetically remodelled during the nave rebuild.

Some local researchers think that the church’s location within the Saxon town boundary and the dedication to St Swithun mean that there could have been a church on this site in the Saxon era. There is currently no documentary or physical evidence to support this theory other than the dedication and location but it remains a possibility.

The tower is 15th century but was remodelled when the nave was rebuilt in the 1730s. There are medieval timbers in the roof which appear to have been taken from the interior of the medieval church as they have some decorative moulding. 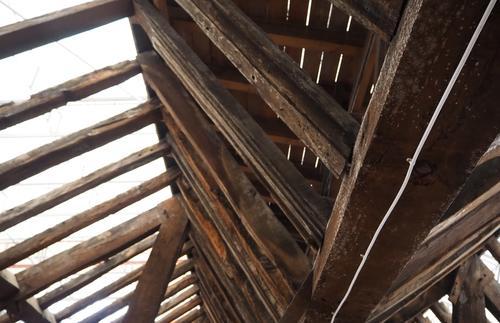 Many of the tiles on the roof are also medieval and were made in Worcester. This photo shows one which has a deer hoof print in it. 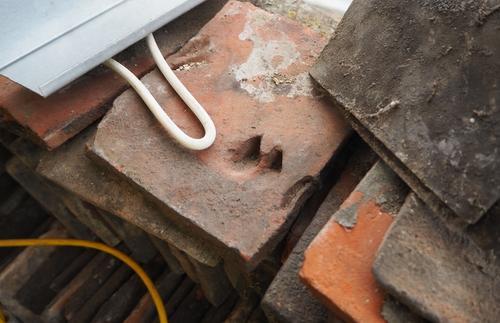 The church before the 18th century rebuilding was described as having a West tower with a nave and a North aisle. The church was thought to have extended Eastwards into The Shambles a little further than it currently does. It's not entirely clear why the church was shortened at this time but it could have been to improve the classical proportions or to create more space at this busy junction between city centre thoroughfares.

St Swithuns served it's purpose as a new home for the wealthy traders of the city until at least 1850 when signs of deterioration began to emerge. The church does not have it's own churchyard and so anyone wishing to be buried there needed to pay a handsome fee to be buried beneath the floor of the church. Around 1850 there were reports that a terrible smell was present there which was certainly deterring people from visiting. During the installation of an under floor heating system in late 2020 a tomb was uncovered close to the altar which dated from exactly this time. Ann Freame was buried in 1850 aged 82 yrs. She was an upholsterer who had a shop and house on St Swithun's Street, just a short walk from the church. Her coffin was elaborately decorated with upholstery and placed in a coffin shaped, brick lined tomb. Her burial in that location demonstrates that, despite the odour, wealthy locals were still prepared to pay a considerable sum to be buried in the church.

It would seem that St Swithuns entered a period of slow decline from the mid nineteenth century with a congregation which gradually became smaller. There was discussion during the 1940s about demolishing the church but thankfully there was just enough interest in it to save this from happening. During the 1960s and 1970s there were large changes in Worcester which resulted in the loss of significant areas of historic buildings but St Swithun's managed to dodge this too although a fine timber framed building next door to the church did not escape. In 1977 the Church of England decided to pass the church on to The Churches Conservation Trust. During 2020 and 2021 a major repair and conservation program was carried out which will ensure it's continued presence in Worcester for a long time to come.

To explore more of the history and archaeology of St Swithun's please use the links below: